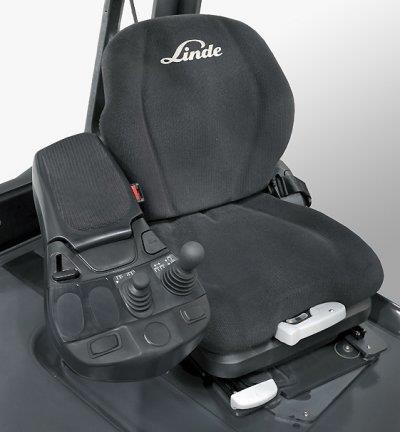 Lost working days due to ill-health are an important business issue. According to statistics from the World Health Organization (WHO), an estimated 60 to 70 per cent of the working population in industrial countries suffer from back pain. Forklift drivers are definitely included in this percentage as they often work in postures that are bad for their backs

Relating to this, the Employers’ Liability Insurance Association for Retail and Goods Distribution (BGHW) has calculated that Linde’s rotating driver’s work station reduces physical strain on the driver by approximately 60 per cent, thereby significantly reducing the risks to their health.

According to another calculation, drivers on a fixed seat spend 43 per cent of their working time in an excessively twisted spinal position. By contrast, if they are sitting on a rotating driver’s work station, the time they spend twisting their body is reduced to just eight per cent.

Working with its system partner NEUMAIER Industry, Linde has developed the rotating driver’s work station for electric and IC trucks as well as a rotating cabin for heavy trucks. The rotating driver’s work station is available in several versions to suit different truck models and drivers of different heights. A range of seat types is also available. In addition, the robust design can be retrofitted to several forklift ranges from Linde manufactured from 2009 onward. All heavy truck models can be fitted with a rotating cabin that is sold by Linde’s network of distributors. Trucks can also be retrofitted.

Benefits of the Linde Swivel Seat